Microsoft catches up with Google

5 years ago, in December 2007, I was concluding my work on a strategic review about the future of messaging, collaborative & office solutions conducted for the Valeo Group, showing that only Google had the correct vision on the field and on change management for the upcoming years with their young product: Google Apps. Valeo adopted it a few months later. Since then, Google has led its boat along with the success that we know, and became a major player in the field.

Meanwhile, Microsoft, whose vision in 2007 remained rooted in its glorious past of the workstation as the prefered tool, and its collaboration paradigm focused on messaging, has of course initiated its transformation, because the change occurring in the world of technology since 2007 has vindicated this vision that I was describing at the time, through which Google showed brilliantly how to proceed.

February 27, 2013, Microsoft officially launched the new version of Office 365, presently the most successful answer against Google Apps. Together with Windows 8 outputs, its Surface tablets, and its Windows phones, we are in fact looking at the convergence of several years of hard work by the teams at Microsoft, and it is done with great success, because the new ecosystem that we see emerging is most attractive and solid.

Adding the availability of the Office Suite for rent, Microsoft’s business model really switches from cloud to SaaS. We are in fact witnessing a major revolution for the historical editor, like the one it had known how to take in 1995 ; a few months to take the turn towards the Internet and drop its owner-based vision of a global network, yet fiercely defended for years.

The advantages of Office 365

Google Apps retains a major advantage in the collaborative office online (with Google Docs), but it requires users to stop using 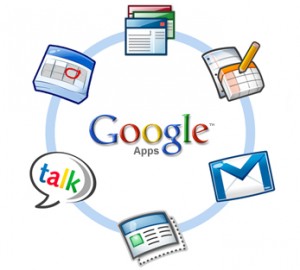 the MS Office suite, which can be very bothersome. As advanced users, we understand the real efficiency that can be gained from adopting such a collaborative solution with the ease and benefits of using Google Docs. But it should be recognized that after five years of deployment of Google Apps for tens of thousands of users, the majority of users and organizations do not cross the bridge, and still continue to mostly use Word, Excel and PowerPoint, and collaborate by mail. Not really working in fact, but sending documents to be revised instead …

For specialists like us this is heresy, but it is the truth of the field, which today confirms the widening gap between those who actually have adopted the new collaborative practices and the mass of users who are still far, very far, from the potential adoption.

Now Office 365 has the same functional coverage as Google Apps has. The difficulty of adopting these collaborative uses paradoxically becomes the major asset of Microsoft. Because the user’s expectation when using Microsoft Office 365 is to continue using its  well-known tools like Outlook, Word, Sharepoint, and all the others that form the Office suite, whilst enjoying the benefits of the Cloud and the Web-based versions of these services, which are becoming widely reachable for a newbie. Microsoft has again made a huge effort evolving every service using HTML5 (thus running on any browser), and the webapps have become sophisticated enough to be used in web mode. Office 365 is the first 100% web usable version, which for us at Kimind is a factor that describes a good product.

Microsoft’s strength eventually lies there, and for years I was used to clarify in my lectures that Google was the undisputed leader of this new generation of services, the ones of the future, but it was also very clear that Microsoft and others would surely create their own solutions. History has shown the ability of these players, Microsoft was the first of many to come to react to these market changes.

With Windows 8, Microsoft has also introduced a new user interface. A pleasure to use and fully implemented from one environment to another, may it be mobile, tablet, PC or the Web. This is something that will be appreciated by users, and it is also a weakness of Google who for five years, despite numerous feedbacks from its users, has been very slow to have consistent user interfaces, still not fully implemented.

From the point of view of costs, the Office 365 solution is roughly twice the price of a Google Apps licence, with equal service request (thus including storage, legal archiving, data security, …). The price of a single licence used to be 3 to 5 times higher. This is a significant change, and Microsoft increasingly approaches Google, who begins to gradually propose paying options that will progressively become more and more expensive. The difference between the two actors is again reduced, and it is interesting to hear users not surprised to pay for Microsoft, but surprised to pay for Google, as the image of Google’s free services remains strong. The cost should no longer be a real problem for Microsoft, nor a real advantage for Google, especially as the Office suite is included in the price of Microsoft licenses, which for users of the suite is a huge advantage.

At Kimind, we are now confident that 2013 will be a pivotal year, and that Microsoft will become the leader in collaborative solutions in the cloud with Office 365. Google has been too slow these past two years, and instead of a radical strengthening in its positions and in widening the gap with Microsoft by conducting marketing and communication campaigns, both necessary steps in order  to successfully enter the world of business, but also by participating in salons that count in the field, the emergence of a genuine and equitable ecosystem of partners and so on, … Google has lost a lot of time to develop its products, to standardize its infrastructure among the public and business, and did not catch the necessary timing to fully take advantage of the point they scored against Microsoft.

Google moved the world of e-mail, office and collaboration like no other player had done since Lotus Notes, 25 years before. Microsoft had 5 years to realize the evolution and catch up.

Now it is is done, and the formidable machine, Microsoft’s marketing department, coupled with a well installed base (still reluctant to adopt the true collaborative practice, but this will take several years), will make an obvious difference in the months and years to come.

Almost a year ago to today, I was still finding the contrary, I showed to an audience of Microsoft Salesmen how Google was ahead of what Microsoft offered at the time as a vision of its products.

Today the situation has changed, and that is why Kimind decides to become a reseller of Office 365 solutions. Because as we have been showing since 2007, our goal is not to sell a particular technological solution to customers, but to allow them to transform their practices and work processes to become more efficient and productive. This requires the adoption of new paradigms of collaboration. Up to this day, the only suite of services that was able of fulfilling this mission, and generating phenomenal productivity gains when  correctly used was Google Apps. Now Office 365 comes in with a solution of the same size, approaching the objectives through a less steep path, that might be a little longer, but surely more fitted to be adopted by users.

Kimind Consulting helps its customers choose the most appropriate solution to their context, taking into account their needs and the ability of their users and their organization as a whole to adopt these new collaborative practices. Kimind then accompany them in the change management necessary to gain individual and collective effectiveness, as it has been doing every day for five years now.

UPDATE (April 12, 2013): some of my readers (thank you Tristan) asked me if Google+ does not change the situation. Google+, especially since the release of the Communities, and also thanks to hangouts, is a great tool. I think this is Google’s best recent success in adding functionalities. I mean communities / hangouts. And I always position myself in the business world of course. What was missing in Google Apps since 2008 was a social network. Communities and Google+ hangouts can finally address this. But Google+ is a real problem for companies to implement, and we do not stop asking Google to fix this as users profiles are mandatory public which is unacceptable for a company! One can of course restrict the visibility of profile information, but the profile is public, with at least the name, the surname and the company of the person. And most companies do not want that. They do not want their profiles to be public. This is the limit (currently anyway)  of the consumer / business vision. Google went a step too far, and should have set out of the enterprise version of Google+ right away to allow administrators to block public access to their users’ profiles, globally and/or individually. If this not done by Google, they will not be able to position themselves as genuine CSR in the vast majority of companies.

Concerning Microsoft, since February 27th, its Office 365 solution integrates news feed in SharePoint, the bare minimum of a decent CSR, but it works very well, and the whole [SkyDrive OfficeWebApp, SharePoint, NewsFeed] online part is a very good collaborative and social working environment, also much better than Google Sites / Drive (due to Sites) that are outdated and that Google has unfortunately not made evolve as it should (the weakest of Google Apps). But on Microsoft’s side, it is mainly the introduction of Yammer and its progressive integration throughout 2013-2014 in Office 365 that will change this play. Because Yammer is really one of the best in the social networking market, and its full integration with Office 365, especially with SharePoint Online. Office 365 allows to become a true platform for enterprise social networking, perfectly secure. And as an answer to Google’s Hangouts, Microsoft is pushing forward its very own Lync online.